A lot of kids use digital media in the classroom and at home. At Harrison Middle School, students have made it part of their extracurricular activities, too. The goal of the Digital Media Club is to “mostly just develop some skills around video production, but also to show them it can be fun,” said Mike Arsenault, the instructional technology integrator who advises club members. According to Arsenault, more than a dozen students participate, most of them fifth- and sixth-graders.

The club, which was started last year by a student who now attends Yarmouth High School, was able to buy technology and equipment with a grant from the Yarmouth Education Foundation. Around $6,000 from YEF was used to purchase cameras, Final Cut Pro video editing software, cases, tripods, shoulder mounts, microphones and an iMac computer. “My goal is to introduce the kids to the tools so they can use them in the classroom,” Arsenault said. The kids mostly work on video production in the club, but Arsenault said they’re free to work on a variety of things, such as photo editing, animation and using GarageBand software. “A lot of this is creating whatever they feel like creating,” he said.

One thing the club recently created was a video with 317 Main Community Music Center. Arsenault said the club was approached by Amy Sinclair, the music center’s director of marketing and communications, about collaborating on the project. “She was great working with kids through the shoot and with editing after the shoot,” Arsenault said. Five students worked with 317 Main to create Project Wonderland, a holiday video showcasing musicians at the center. The students did camera work and editing, and were also in the video. Seventh-grader Eleanor said she used a lot of skills she already had when working on the video, but also learned new things about editing. “I really like editing,” she said. “It was really fun.” Arsenault said he was impressed by the work the students did on the project. “I knew it’d come out well, but I was pleasantly surprised,” he said. “They did a great job with it.”

The club doesn’t have any plans to partner with community organizations in the future, but will focus on doing school projects, Arsenault said. “There’s always so many great things going on within the school, but we don’t always promote them enough,” he said. Although Arsenault wants to do more digital media projects at Harrison Middle, the school already is known for its innovative technology. It has been named an Apple Distinguished School since 2007, with the exception of the 2013-14 school year. According to Arsenault, the award is presented to schools that have innovative learning and teaching, ongoing professional learning, a flexible learning environment and also show visionary leadership. Arsenault, who’s a Google Certified Innovator, said the club is a great way for kids to learn about digital media but, more importantly, it’s a way for them to see that creating things with technology is fun. Eleanor said the club has taught her both of Arsenault’s objectives. “Sometimes I wonder if I can do something on iMovie and Mr. Arsenault always knows, and helps me,” she said. 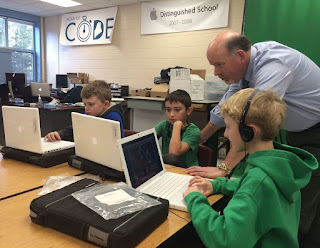