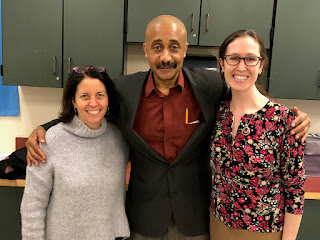 Part One: Grades 11 and 12
David Mills is in the house!  Part one of Marita O'Neill and Jackie Brookes's grant, Celebrating Diversity:  American Voices -- Langston Hughes and Martin Luther King, came to life today at YHS!  David Mills performed as Langston Hughes in the YPAC this morning for the Junior & Senior class.  He was a one man show!  He started his performance reciting Hughes's famous poem called The Negro Speaks of Rivers, then continued reciting Hughes's poems and short stories for about an hour. Throughout his performance, he used many different voices: male, female, young, old, black & white.

After his presentation this morning, he conducted a workshop on Blues Poetry in two Senior AP Literature classes.  The class read a Hughes poem titled Midwinter Blues.  After the students read the poem out loud, they dissected each stanza, line by line, discussing setting, structure, form, tone, meaning, repetition and rhyme.  The students then wrote their own Blues poem using the formula they'd just learned.  In the background, Mr. Mills played a Chicago Blues song, while the students wrote their poem.  At the end of class, a couple of brave students read their poems out loud and I'm here to report that Ms. O'Neill has some terrific poets in her class!  I could tell the students really enjoyed the workshop, because they personally thanked Mr. Mills and shook his hand on the way out the door.

What a bonus for the students to have their English teachers and History teachers join forces to create this experience for them. 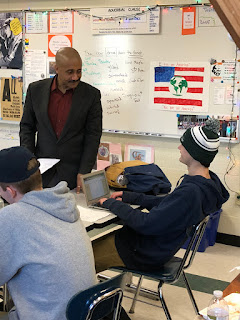 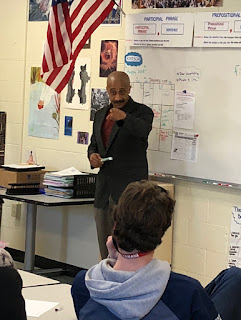 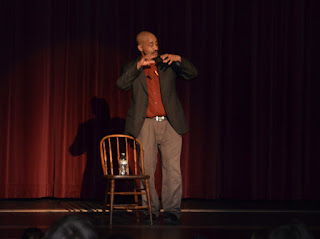 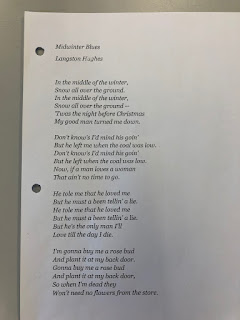 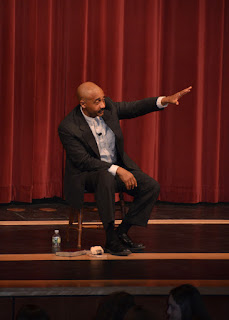 Part two of the David Mills grant started off with a bang today!  The YPAC was filled to capacity with Freshman, Sophomores and 8th graders as David Mills transformed himself into Martin Luther King Jr.

It was another terrific one man show!  David Mills recited excerpts from Dr. Martin Luther King Jr.'s speeches and letters, including "I Have a Dream", "Letter from a Birmingham Jail" and "If I had Sneezed".  In between the speeches, he performed interludes to bring the audience from one stage of King's life to another.  One of the interludes discussed how King felt when the 4 girls were killed in the Alabama church in 1963, just days after giving his "I Have a Dream" speech.  It was a powerful performance.
This afternoon I attended a workshop in Mrs. Ruthman's Sophomore Modern World History class.  It was a small class, but they knew their stuff!  Mr. Mills started off the class by giving the students some historical context around the letter that Dr. King wrote from his jail cell in 1963.  He talked about the bus boycott, which lasted over a year, the protests in Birmingham (which was nicknamed "Bombingham"), and why Dr. King was imprisoned.  When talking about Dr. King's letter from jail, Mr. Mills explained how Dr. King appealed to the reader on an emotional and intellectual level through his high rhetoric.  Mr. Mills described the letter as an "epistolary poem", which is a poem in the form of a letter.  After the class read the "Letter from a Birmingham Jail", line by line, they discussed setting, repetition, meaning, parallel syntax, alliteration, paratactic syntax, hypophora, antithesis, anaphora, periodic sentences and metaphors.  Did you get all that?  The Sophomores did!  They were a smart bunch.
After the lesson on the literary devices found in Dr. King's letter, the students were asked to write their own 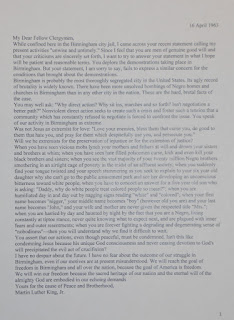 "epistolary poem" and were asked to include the elements they'd just learned from Dr. King's letter.  They were charged with writing about an experience they'd had in their lives where they'd been misunderstood, hurt or disrespected by someone with whom they were not able to respond to.  The students wrote and wrote and wrote.  Mrs. Ruthman's class turned into a writing machine.
I know this grant was written for the high school, but I thought you might be interested in a couple of quotes from the 8th graders who attended the performance this morning.....
"I loved it!  The acting was amazing and I learned a lot of things about King's struggles that I wasn't awarde of.  I had no idea how vicious racism could be.  I was struck by the phone threat King received where they said they would kill his wife and daughter.  My big takeaway was that hatred is pointless"  This 8th grader said he was very moved and said this program was one of his favorites!

"It was awesome!  Mr. Mills did a great job with the miming.  I learned a lot about MLK". 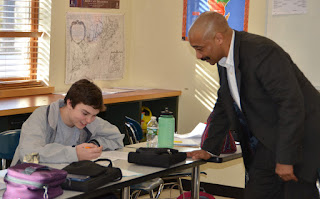 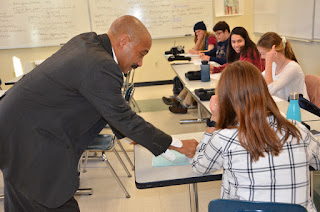 "I thought Mr. Mills was a really good actor and I enjoyed hearing him recite the "I have a Dream" speech.  I didn't know he was stabbed and I'd never heard the "If I had Sneezed" speech.  I loved the ending, when Mr. Mills talked about how Dr. King didn't want to be known for his Nobel Peace Prize or his many awards when he died, but for the impact he left on the world."

A special thank you to Caitlin for letting me join her class today and to Marita & Jackie for writing this grant and for bringing this experience to our students!  And finally, thank you for including the 8th graders.  It obviously had a big impact on them. 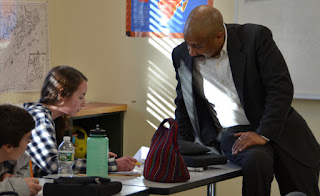 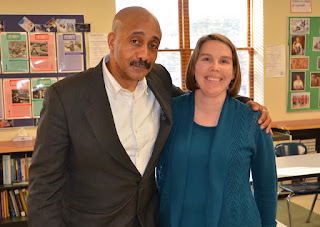 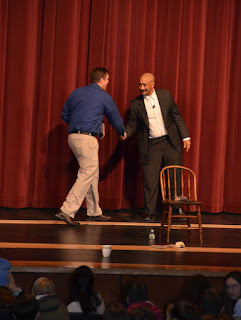 Grade 9 students studying a new unit on Oceanography used the #googleexpeditions kit (donated by YEF) to learn about acidification in the ocean as well as "swimming" with some of the undersea creatures. Sarah Hirschfeld and Mike Weiss led the lessons and dressed appropriately in scuba gear. 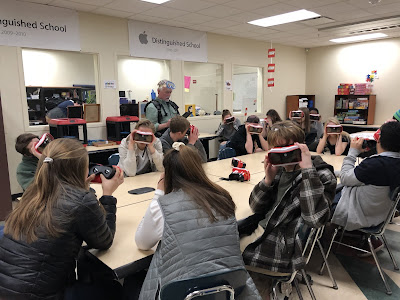 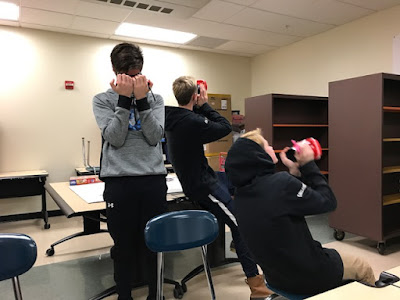 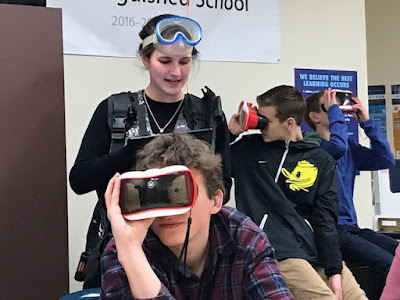 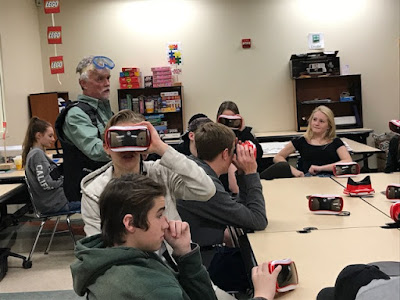